WOMEX-the Worldwide Music Expo-was forced to go virtual this year instead of its planned live presentation in Budapest. There were advantages and disadvantages with this decision. While the personal connections and ability to see musicians perform live were significantly diminished (though not completely eliminated,) the greatly reduced admission fee and elimination of travel costs allowed over 20,000 people to attend WOMEX 2020, including four WORT world music programmers:  Gloria Hays (Diaspora, On the Horizon, Pan Africa); Ankur Malhotra (Pan Africa); Jeff Spitzer-Resnick (Diaspora, Pan Africa) and Dan Talmo (Global Revolutions.) Each of them collected music from WOMEX performers which they are already sharing with WORT listeners, and they will continue to do so in the coming days. They have also arranged interviews with WOMEX artists, some of which have already aired. Since WOMEX is such an incredibly unique experience, each WORT programmer who attended this year is pleased to share their take on their own experience.

For anyone that loves World music, WOMEX is the ultimate bucket list destination. With this year’s annual event scheduled in Budapest, those of us in the US were disappointed that we could not attend. At the beginning of October the organizers, Piranha Arts out of Berlin, made the difficult decision to move the entire event online after Hungary’s restrictions were increased, making it impossible for attendees to be there in person. This worked to the advantage for those of us from WORT that had hoped to be there. WOMEX is a wonderful opportunity to network with musicians, presenters, media, record labels, venue and festival directors from all over the world. Being able to do this event online offered many opportunities to connect. There were group networking meetings and sessions, mentoring, showcases, video booths, film screenings, even “cocktail hours” as opportunities to meet one another and hear lots of new music. In general, it was expressed that these connections are very important, now more than ever. There are many innovations in how people are building their audiences and presenting their music. Radio, especially a station like WORT that can be listened to worldwide, can play a significant role in promoting artists from all corners of the world. We all look forward to being together in 2021 when WOMEX will be held in Porto, Portugal.

This was my 9th consecutive year of attending WOMEX. My first WOMEX was in 2012 in Thessaloniki, Greece, which was filled with excitement (and danger, but that’s another story.) This year was quite different from the others, considering it was all virtual. A lot happens at the physical WOMEX, with conference sessions, showcases that go on into the early hours of the morning, important meetings, chance encounters, a whole world of new and hidden music opening up, discussions and business dealings, drinks, dinners, and dancing into the morning (at the DJ showcases.) Over the years it has become an annual ritual, a reunion with colleagues from around the world and often, the only place where I get to meet acquaintances and friends, some of whom have become close, lifelong friends. I have attended WOMEX in many different roles – as an artist manager, label owner/music producer, DJ/radio host, jury, speaker/panelist, stand holder, and representing showcase artists (WOMEX 2015 with Tritha Electric, WOMEX 2019 with Lakha Khan.)

WOMEX 2020 had its ups and downs for me – networking is never the same when scrolling through Zoom screens and the inherent technology issues. Nonetheless, it was great to see so many of my colleagues  again, and to catch up with them.

On to the showcases: Several new artist discoveries, and some great music. Of course the format had changed again with the virtual showcasing and instead of the typical 45 minute performance, we had about 15-20 minutes of pre-recorded shows, followed by interviews with the bands. Some of the highlights of the showcases for me were:

Unfortunately, the performances were just a fraction of a live show. 15 minutes does not give a sense of what the band would sound like in a full-length concert experience. Previous showcases used to be 45 minutes long! Also, the technology divide and access to resources came more into play. Some of the videos were slickly produced, with multiple camera angles, and many of the western artists had received funding from their governments for the productions. Not all artists have access to these resources, so the playing field was not balanced. Also very surprising for me was that bands like Fulu Miziki have been around since 2003 (2008 in their current incarnation,) yet did not have a single audio track they have produced or even sharable with radio hosts. Other bands like Kutumba, while good, have not been around for decades, and to have them showcased meant that there were other bands who did not get an opportunity. The Korean bands have a huge plus since they get well funded by their governments, and there are always 1-2 Korean bands selected for the showcases (again quite disproportionate.) I eagerly wait for the day when some of these issues are addressed by WOMEX and the jury.

The one plus of the virtual edition of WOMEX was that I got to see some exceptional films, which we normally do not get a chance to see when the physical conference is happening. Some of the notable ones were:

Although I have been hearing about WOMEX for years, and Madisonians have reaped the benefits of Bob Queen‘s attendance there as he brings many world musicians to Madison festivals that he first meets at WOMEX, the cost and time to travel to Europe has made it impossible for me to attend in the past. So, while I completely appreciate that the live experience is better, for me, if WOMEX had been live this year I would not have been able to attend, so experiencing it virtually for only 79 euros was a tremendous experience.

Highlights for me included: 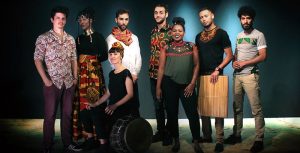 This is the fourth WOMEX for my wife Paula and me. While a bit saddened to not travel to Budapest for the live event, we were not at all disappointed with the online edition of WOMEX 2020. For five days we were glued to our screens watching fantastic showcases with many new artists! I’ve been programming world music at WORT for 25 years and still, more than half of the showcases were by artists I’d never heard of.

While so many of these were outstanding, I would like to give special acknowledgement to the artists from Hungary. As the host city, before going virtual, Hungarian musicians were to be featured in several key showcases and gala concerts. Though these were shifted to online events, they did not disappoint. First, Magos played solid traditional Hungarian folk music and featured two members who have played in Madison twice, including at the Madison World Music Festival five years ago.

Agnes Enyedi is one of the leading vocalists in the Hungarian folk scene and her husband Soma Salamon is an outstanding wood flute master. It’s always a pleasure to see them perform together.  They were followed by one of the great surprises of all the groups at WOMEX: The band Ötödik Évszak (The Fifth Season) is part jazz, part folk, part village, and part urban. The band’s lead vocalist Izabella Caussanel is French with Hungarian roots, and she captivated us with her effortless mix of styles from the two countries.

Also noteworthy was the Hungarian a cappella women’s trio Dalinda. Through their choice of traditional songs, they highlight the contemporary roles and experiences of women in society.

Lastly, and mostly, was singer Monica Lakatos of the Olah Romany minority of northeast Hungary. She comes from a community whose traditions and language are threatened by globalization. She was awarded the WOMEX prize for Artist of the Year for her lifetime efforts to highlight the cultural value of her community. Upon receiving the award, she and her band Romengo gave a stellar performance of some of the happiest and most soulful music on earth. Monica Lakatos and Romengo have been in my WORT program rotation for several years. I look forward to sharing more of her music and music from all these groups with WORT listeners.

(All photos and music courtesy of WOMEX)