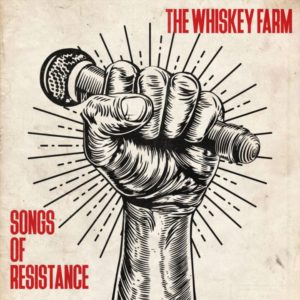 WORT-FM is proud to be a media sponsor for the ACLU fundraiser at the High Noon on Wed. June 28 from 6:30-9:30 pm. This event is also a release party for Songs of Resistance, the fourth CD by local folk rock band The Whiskey Farm. All proceeds from the door will go to the American Civil Liberties Union of Wisconsin.

“If you’re looking for a way to support the resistance and have a good time doing it, this show is for you,” said Sybil Augustine, WORT’s music director. “WORT invites you to join us for a night of “Resistance Music” featuring The Whiskey Farm, Frank Busch of Wheelhouse, Ryan Mauer, Evan Murdock, and Amber Sebastian. Speaker Kristin Hansen from the ACLU and other community activists will talk about how to be an effective part of the resistance.”

Musically, Songs of Resistance follows in the Americana tradition of The Whiskey Farm’s other records, but lyrically the entire record is devoted to current social and political events. The record is available for pre-order at the band’s website.

Frank Busch is the frontman for Wheelhouse, a nationally touring Americana and bluegrass band hailing from Madison. Wheelhouse performs more than 220 shows a year. The band features three- and four-part harmonies, fiddle and guitar leads and the driving rhythm of the upright bass.

Ryan Mauer & the Angry Fix is a four-piece jazz-infused folk band borrowing from the sounds of Neil Young, Josh Ritter and the Counting Crows.

Evan Murdock has performed in Madison for almost 20 years. Since carrying his mandolin into the Copper Grid for his first Madison jam night, he has performed with the Lonesome Rogues and The Kentucky Waterfalls. He has performed as part of Imperfect Strangers for the past five years.

Amber Sebastian is a local vocalist and former lead singer for the now extinct Madison indie-pop band Soundless. She has recorded and shared the stage with local artists Brandon Beebe, Corey Hart, Lost Lakes, and Christopher Plowman, among others. Her voice is versatile and she’s always looking for folks to collaborate with. She currently performs with Purple Veins: The Essential Prince Tribute band.