With the potential for scattered showers tonight in Madison, there may be a delayed start to tonight’s live performance or a modified program.  Please stay tuned for an update before the concert – WCO hosts “Concerts on the Square” live at Breese Stevens Field tonight with a pre-concert show at 5 pm running till 8 pm and will be broadcast live on 89.9 FM and streamed on wortfm.org.

Hard times continue for live music & musicians, so we’re bringing the show to YOU!  Sept 1, Wisconsin Chamber Orchestra and Concerts On The Square keep this beloved summer tradition alive in 2020 with a little help from Back Porch Broadcasting. Next Tuesday evening, the WCO hosts a special “Concerts on the Square” event, playing live at Breese Stevens Field to a limited audience of only 25 people. The good news is that all music fans can hear the event live on WORT, with a pre-concert show starting at 5:00 pm. The  show runs from 5:00-8:00 pm and will be broadcast live on 89.9 FM and streamed on wortfm.org. The Orchestra will also stream the event online and simulcast to a drive-in audience at the Madison Mallards Duck Pond. More information including links, guidelines and ticket purchase options is available here.

“Since the pandemic hit we’ve looked for new, creative ways to share the WCO’s music and to live up to our mission to provide world-class orchestral performances for as many Wisconsinites as possible,” said Joe Loehnis, WCO’s CEO. “After looking at every possible option, we determined this was the best way to have our musicians play live for the community. We are thrilled to partner with WORT 89.9 FM and the Madison Mallards to accomplish this vision.”  The broadcast starts at 5 pm with a pre-show “warmup” event featuring interviews with past and present collaborators and participants in Concerts on the Square conducted by Tim Sauers (of Overture Center and one of the hosts of WORT’s Better Living Through Show Tunes Sundays at 2 pm.)

For the concert on Sept. 1st, WCO will be joined by Beloit-born electric violinist Tracy Silverman, who will play several works previously commissioned by the WCO and offer the world premiere of a work titled “For the Greater Groove.”

“We want this to be a celebration in resilience, with the WCO providing a couple hours of live music during these times of pandemic featuring our talented musicians,” said Maestro Andrew Sewell.

“We all miss being able to gather for Concerts on the Square,” said WORT Music Director Sybil Augustine.  “WORT is extremely proud to be able to bring this event to listeners as we all figure out how to keep live music going during the pandemic.” 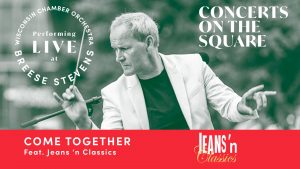 OFFENBACH | Overture to a Grand Orchestra

Our finale of the summer features Tracy Silverman, electric violin. Tracy is the music director for the popular recording artist and pianist Jim Brickman. Tracy now lives in Nashville but grew up in Beloit. He left Wisconsin for Juilliard and was a member of the Turtle Island String Quartet before branching out on his own with the construction of his custom made electric 6-string violin.

A pioneer in the field, he has performed major commissions for the Los Angeles Philharmonic and American composer, John Adams in the Dharma at Big Sur.

We have commissioned four pieces from Tracy over the past 20 years, and he’s coming back to Madison to perform not only a couple of his previously commissioned works, Anthem 25 and Matisse: La Danse, but this will be his world premiere of For the Greater Groove.

We are also performing works by Offenbach, his overture for a grand orchestra, Tchaikovsky’s Sleeping Beauty Waltz, and Duke Ellington’s arrangement of the Nutcracker Suite. Duke and Billy Strayhorn arranged this suite based upon famous movements from the Nutcracker for jazz ensemble. It features alto saxophone, tenor saxophone, and a jazz bass.

If you’ve ever been around Concerts on the Square, you’ll know that at the end of every concert we play this song, Home to Madison. Tracy Silverman composed that for the Wisconsin Chamber Orchestra back in 2006 when the WCO held a competition for the 150th anniversary of the founding of Madison.

This song has come to be a hallmark of Concerts on the Square, and Tracy will perform it ‘live’ for us at the end of this season’s final concert.